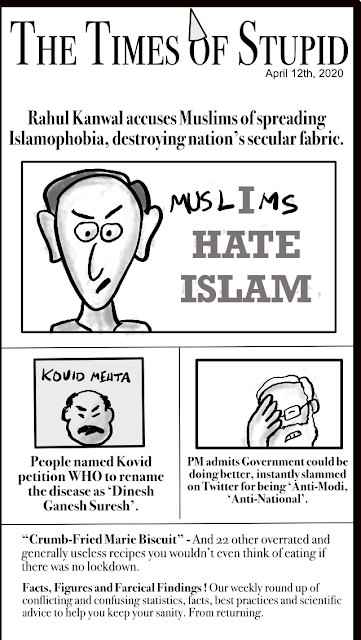 People like Rahul Kanwal sow more seeds of future violence than even most terrorist organizations. He has treated children with cruelty, violence and hate - this only propagates the cycle, never heals anything. If the media in this country truly want to end terrorism, we need to treat children with love and compassion, not tell them that the society they live in hates and mistrusts them. Kanwal's actions have just possibly created several violent young men who will undoubtedly seek revenge many years later.

See through the lies - these people do not want to see an end to violence - that would mean they're out of jobs.

Meanwhile, I think Narendra Modi has really painted himself into a corner now. Even if he were to admit publicly to a mistake, the monster he's created would surely swallow him.

In other news - I found out, quite by accident, that Kovid is a name in India. My commiserations, guys. I can only imagine what it would be like for me if there was a dangerous disease named 'Anand Ramachandran'.