The monks of the Order of Cistercians of the Strict Observance, commonly known as the Trappists, have demanded an apology from the Government of India - claiming that Prime Minister Manmohan Singh's long periods of absolute silence offends their religious sentiments.

"The sentiments of the Trappist order have been hurt by the silence of Indian Prime Minister Dr.Manmohan Singh, which is an obvious attempt to mock our belief of devout non-speech." said a spokesmonk for the Order, before being immediately excommunicated for breaking his silence.

Another monk then took over the duties of briefing the media, resorting to dumb-charades to convey his message.

"Four words. First word. Now? No? Okay . . here? This? THIS! Got it. Third word. Rhymes with ? Ball? Another word? Another word for Rhymes? Oh sorry - another word for ball. Round? Sphere?" he said angrily to the reporters gathered.

Quickly getting frustrated with his chosen method of communication, he then handed out printed press releases to the audience, shaking his head to show his displeasure.

According to the words of the release, "The sentiments of the Trappist order have been hurt by the silence of Indian Prime Minister Dr.Manmohan Singh, which is an obvious attempt to mock our belief of devout non-speech. His non-words have upset the many thousands of Trappists worldwide.We demand that the Supreme Court of India ban the Government of India at once, until Dr.Singh apologizes to us, and promises that he will not mock us by being needlessly silent ever again. If the court does not do anything about this, we cannot guarantee that there will be law and order in Indian cities."  The trappists also claimed that they had proof of Dr.Singh's offensive and damaging non-statements, and provided a CD featuring 60 minutes of complete silence recorded in the Prime Minister's voice as evidence to back their claims. 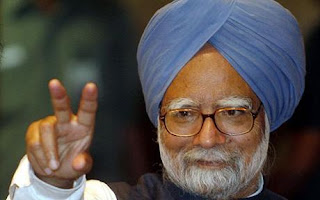 Prime Minister Dr.Manmohan Singh, pleased that his team mates have guessed the first word, signals "second word" in a session of dumb-charades with finance minister P.Chidambaram and senior Congress leader Ghulam Nabi Azad (not in picture).

The Congress party has, of course, been quick to rubbish these allegations.

"It is ludicrous to say that the Prime Minister's silence has hurt anyone's religious sentiments. How can anyone be hurt by someone NOT saying something ?" said Communications and IT minister Kabil Sibal, beginning fairly strongly and logically by his standards. "And so what if they cannot guarantee law and order? Neither can the Indian Government. At least on that, we're on the same page.", he quipped.

" We need to protect freedom of non-expression. The Prime Minister, just like every Indian citizen, is guaranteed the right to free silence by our constitution. It is our duty to protect these rights." added Mr.Sibal, slowly starting to chip away at a block of irony he had been hiding under his armpit.

"Also, the CD is clearly doctored. The silence on the CD sounds nothing like the PM's silence. It has been morphed." he said, slowly but surely returning to form.

"Also, everybody knows that Dr.Singh has been making a constant effort to be more like Beyonce. So these days he lip-syncs all his silence. I don't see why the Trappists are getting so offended." he concluded, cranking it all the way up to eleven in his inimitable style.

Mr.Sibal has also ordered the immediate arrest of three people for not forwarding any cartoons about Dr.Singh on social media, claiming that the non-forwarding of cartoons insults the Prime Minister's habitual silence. He has also warned that people who don't tweet or don't post FB status updates would be at risk of getting arrested for defaming Dr.Singh. "We are using infra-red USB Bluetooth to monitor every tweet that isn't tweeted and every FB status that isn't posted. If the CBI finds anything defamatory, offensive or downright mean about the Prime Minister's silence, we will take action.", he said, reminding people, for the first time in his life, of Sunny Leone.

However, many people in India have actually sympathized with the Trappist Order on the issue. "If they want Manmohan Singh to speak up, and the Government of India banned, then I'm all for it." said a world famous Wildlife Photographer, on condition of anonymity. "If the Government itself is banned, then people will have the freedom to watch films like Vishwaroopam and freely distribute the cartoons of Aseem Trivedi. What a great . . . oh, wait . . . " he trailed off.

Needless to say, both the Trappist monks and Dr.Manmohan Singh are choosing to stay silent on the matter - ensuring that this controversy will never end.
Posted by Anand Ramachandran's Evil Twin at 8:06 PM 3 comments: