Mrs. and Mr.Sunil Poorvath, residents of Annanagar, Chennai, have taken the unusual, imaginative and courageous decision not to name their newborn son ‘Aryan’.

Explaining his stand, Mr.Poorvath said “I don’t know . . . . I just don’t like the name very much. I was thinking something along the lines of Sumit, or Prateek, or maybe even Sankalesh. But I never quite got this whole ‘Aryan’ thing.”

Mr.Poorvath also admitted that he was the guy who always went against trends - he continued to drink Thums Up even after Pepsi and Coke entered the market in the 90s,still insists that Ambassador is the best car for Indian roads, and displays a disturbingly lingering nostalgic affection for Meenakshi Sheshadri. He has also kept several pairs of his old ‘parallel baggies’ and ‘bellbottoms’, just in case they come back into fashion. 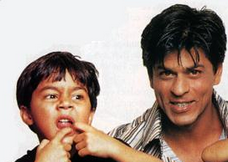 Some people attribute the popularity of the name Aryan to Shah Rukh Khan's son, shown here trying valiantly to look sillier than his dad.

A content Mrs.Poorvath told reporters that she was happy to leave the choice of name to her husband. “I’m really okay with anything, except those horrendous ‘one-letter-swap’ variants like Jishnu, Rijay or Prakaf.” she said, shuddering involuntarily at the last option. “Hhhrrrrr . . Prakaf! Yikes!”, she added, looking protectively at her newborn non-Aryan baby boy.

Our investigations into this matter have also revealed that at least eight of Mr.Poorvath’s close friends have secretly breathed sighs of relief, happy in the ill-informed thoughts that their to-be-born kids will now be the only ones named Aryan in their immediate circles.

According to statistics available with the HRD ministry, one in every six male children born in urban India is being named ‘Aryan’ or ‘Arya’ - virtually ensuring that in the coming years, at least some kind of Aryan supremacy will be indeed maintained. The reasons for this trend remain largely unknown, although many attribute it to various reasons such as film star Shah Rukh Khan’s choice of the name for his son, easy pronounceability, and the decreasing fashion value of traditionally popular names such as Shankar, Jayant, Sudheer and Annadhaana-p-pirabu.

“Let’s face it, old fashioned names don’t look quite as nice on a fashion label, cricket scoreboard, or film credit. Can you imagine a fashion range called ‘Casbah - by Pramod’ ? Imagine a cricket scorecard that read ‘Annadhanna-p-pirabu - c Saivignesh b Jignaprasad’ ? We need the Aryans, Rohans and Armaans to make our world fashionably correct.” opined a ridiculous looking fashion designer simply called ‘Ae’.

Meanwhile, the DMK Government in Tamil Nadu has responded by announcing tax benefits to all couples who name their sons ‘Dravid’, causing thousands of guys named David to simultaneously exclaim “Otha, just missed.”
Posted by Anand Ramachandran's Evil Twin at 11:51 AM 51 comments: