Considering that ‘Ek Duje Ke Liye’ ended with both Kamal Hassan and female lead Rati Agnihotri deciding to make like the Titanic and plunge into the ocean, presumably to live out the rest of their days together (Okay, minutes. Okay, seconds. Sheesh.), it seems an odd choice for a sequel. But Kamal was quick to clear the air for his fans. “Basically, what happens at the end of the first film is this - Vasu and Sapna don’t drown. They are rescued by an underwater civilization and placed in cryostasis chambers. The sequel is about what happens when they eventually wake up.”, said the actor, managing to elicit a reaction of stunned disbelief and sporadic spluttering from reporters present.

While he refused to divulge any more information about the story (probably because it doesn’t exist yet), Kamal did say that the film would give him a great opportunity to say the words ‘Czhzhyostasis Chambezhzh’ and ‘Undezhzhwatezhzhzh Civilizaizhzhtion’, in his world famous accent which makes every word with an ‘r’ sound vaguely like ‘Vazhapazham.’ 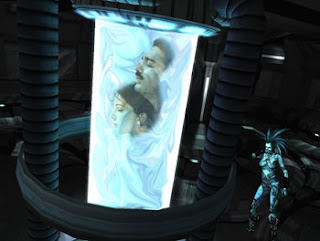 One of the underwater denizens carefully considers if it's a good idea to wake Vasu and Sapna from cryo-sleep. It probably isn't.


“While the original was a tragic love story, Ek Duje Ke Liye 2 will be a special effects Sci-Fi extravaganza”, said Kamal, inadvertently giving credence to the theory that he felt the need to go one-up on long time rival Rajnikanth’s recent blockbuster, Endhiran.

Apparently, the film will feature spectacular “Hollywood special effects from Singapore”, underwater song sequences, and a digitally recreated, CG version of the late Poornam Viswanathan. In other news sure to delight fans, the film will not be directed by K.S.Ravikumar, and Kamal Hassan will be playing only three characters, none of which resemble a zombie version of Jay Leno. The film will have elements of comedy, romance, action and even horror - the last of these chiefly due to the presence of Rati Agnihotri as the heroine.

“It’s a family entertainer with mild sex and some light violence”, said the film’s producer, a man known simply as ‘Kannan’, effectively describing most Indian films. “You can watch with family”, he added with a slightly creepy grin, without specifying whether this would be appropriate, or even enjoyable.