by Anand Ramachandran, but Ramesh Srivats had the idea first. So if you're going to sue for defamation, you know your target ;)

Moving with unprecedented speed and decisiveness, the Government of India and the BCCI has come up with a remarkably elegant and effective solution to the ongoing IPL controversy - they have appointed Lalit Modi as External Affairs Minister and made Shashi Tharoor the commissioner of the IPL. 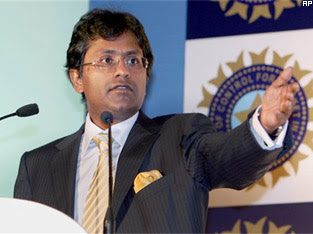 Lalit Modi points in the general direction of Sikkim, denying its very existence and ending the border debate with China in a matter of seconds.


"We suddenly realized that the amazing negotiation and crisis-management skills displayed by Mr.Lalit Modi are completely wasted on trivialities such as cricket. They would be put to much better use in the MoEA, where he could tackle serious problems such as Pakistan, China and Sri Lanka, and give the rather blade ministry a much needed branding makeover. Woo hoo!", said Prime Minister Dr.Manmohan Singh.

"Any man who can so brazenly thumb his nose at everyone even when he is neck-deep in shit will be a valuable asset in telling Pakistan to pike off.", said Dr.Singh, unexpectedly using a cuss-word cribbed from the Planescape : Torment universe. "His superb denial skills will also come in handy in situations where we need to deny the existence of fairly obvious but annoying inconveniences such as the LOC, the refugee problem, and most of the north-eastern states. Plus, Mr.Modi is a perfect blend of 'external' and 'affairs', making him the perfect man for the job.", said Dr.Singh.


Early reports also indicate that Mr.Modi may be given additional charge of the Finance Ministry, to take advantage of his undoubted mastery of making ridiculously untenable financials seem viable, even exciting. "We are confident that Mr.Modi will be able to find sponsors who will pay for initiatives such as the UID and NREGA schemes, and even find a title sponsor for the national debt. This will free up thousands of crores of taxpayer money that we can coolly pocke . . er . . ah . . pockastickate for stringinindous rural development projects.", winked Congress party spokesman Abhishek Manu Singhvi, making up a few official-sounding words in the nick of time.

Apparently Mr.Modi has already swung into action, and has initiated an auction process to create privately held franchises out of institutions such as the State Bank of India, NABARD and, unsurprisingly, the Income-Tax Department. "We'll see how you lT losers investigate my accounts when my good friends Mukesh Ambani and Vijay Mallya own your sorry asses", smirked Modi, under the mistaken impression that this was not already the case.

Meanwhile, former Minister of State for External Affairs Dr.Shashi Tharoor will take charge as commissioner of the IPL. His immediate duties will include implementing Mr.Modi's original vision of globalizing the league, by taking it to countries such as Gabon, Burkina-Faso and Sierra-Leone. "Dr.Tharoor's experience in Africa is very relevant to the IPL, since a third of the IPL matches have been played there anyway.", explained BCCI president Mr.Shashank Manohar, justifying the unexpected posting. "Plus, Africa has contributed one of the IPL's most integral parts - Akon. Smack that!", said Manohar, wisely resisting the urge to swiftly slap his palm on the posterior of BCCI secretary Mr.Niranjan Shah, who was standing beside him.

Neither Mr.Modi nor Dr.Tharoor were available for  further comment, since they've both been told to stay off Twitter, cutting off their main communication channel.
Posted by Anand Ramachandran's Evil Twin at 6:09 PM 43 comments:


by Anand Ramachandran, with a little help from his friends.

As a part of a strategic entry into the film production business, the Chennai Doordarshan Kendra has announced a multi-crore 3-D feature film version of it's popular 80s TV show, 'ManaiMaatchi'. It has also announced film versions of other popular classic programmes 'Munnottam', 'Ediroli' and 'Vayalum Vaazhvum' and an animated feature based on 'Maanila Seidhigal'.


"We have noticed that there is an international trend of making TV shows into blockbuster films, as evidenced by recent examples like Sex and the City, the A-Team and The Dukes of Hazzard. So we decided to take our best, most popular shows and turn them into blockbuster films, to increase revenue.", said a guy whose insistence on wearing a safari suit distracted us from ascertaining his name.

Apparently, ManaiMaatchi : The Movie (3-D) will feature Tamil film superstar Trisha as a random housewife who will, over the course of the film's running time of three hours, show the audience how to make, among other things, rava-uppuma, a basic cross-stitch pattern (featuring Kartik Bose demonstrating a cover-drive to some eager Englishmen)) and a cool toy boat using some camphor and an old Cuticura tin. The film will also feature an appearance by superstar actor Dr.Mr.Joseph Vijay Saar as the guy who brings in the tray carrying onions, and maybe also some chillies. When asked why this kind of film required 3-D, the safari-clad guy replied "For the exact same reasons that Clash of The Titans did. I have nothing more to add."

The Tamil community is thrilled with the news, and they reacted with the same enthusiasm they show whenever anything remotely relating to Tamil Nadu is mentioned anywhere, especially on Twitter.

"Wow. An animated feature based on Maanila Seidhigal? Yay! This is what I've been waiting for all my life - a cartoon version of a minister inaugurating a village hand-pump, followed by some women getting bank loans! Exciting! ", said renowned animation industry veteran P.C.Vikram. He also fervently hoped that the filmmakers wouldn't leave out the sequences where some bored looking men sit below a photo of former Chief Minister K.Kamaraj while another addresses a group of twelve villagers.

Doordarshan has also revealed that the 'Munnottam' movie would consist of a stern looking woman with a disconcertingly bass voice reading out a list of all their upcoming movie releases for the next two years, and the 'Ediroli' movie would feature a man wearing thick horn-rimmed glassed cheerfully answering questions about all their other movies. The 'Vayalum Vazhvum' feature is tipped to be the launch vehicle that will kick-start the celluloid career of veteran journalist P.Sainath.

Doordarshan will be ensuring that all the film versions carefully retain the flavour of the original shows, by using techniques such as tiresome direction, monotonous voice dubbing, and shooting the entire slate of films in Black and White.

"Great news indeed", said Vishwanathan Srinivasan, a long-time fan of retro Doordarshan content. "Now, if only they would remake 'Vilayaatu Vimarsanam' as a sports film along the lines of Escape to Victory, my life will be complete.", he said, turning disproportionately emotional and sentimental.

"I'm not sure that the content translates very well to the feature film format.", said wildlife photographer S.U.Saravanakumar, playing the devil's advocate. "What's next? An 'Over To Delhi' film which will make the audience wait for some twenty minutes before switching to some totally unrelated movie?", he asked, causing the people who came up with 'Blind Date' at Sathyam Cinemas to shuffle their feet and look around nervously.

Plans have also been announced for a two-hour long film called Thadangalukku Varundhugirom : Sorry for the Break (Like Prince : It's Showtime) - which will be the world's first movie to consist purely of its own interval. It will simply feature a still image of a broken film-strip on the screen for the entire duration of the film, while people mill about, buy popcorn, and discuss whether the second half will be better than the first half. There will also be a sequel, Thadangalukku Varundhugirom 2, which will be exactly the same, except it will feature an image of a family riding a scooter which has just had a tyre blowout.

"We are proud to be a part of such an innovative and daring initiative to take these old classic TV shows to an entirely new audience. Hopefully, other Kendras will take up the baton and go on to produce their own such interesting films." said the safari suited spokesman, leaving the gathering with nightmarish images of a big-screen adaptation of 'Sansad Samachaar', directed by Madhur Bhandarkar or Ram Gopal Verma.
Posted by Anand Ramachandran's Evil Twin at 3:38 PM 29 comments: