Legendary Tamil film director, producer, actor, music director, lyricist, editor and overall pWnzor Vijaya T. Rajhenderr, known to his loving fans simply as 'TR', is now available as a Virtual Reality 'Avatar', so that fans can enjoy and interact with his presence in a virtual world. According to a release from his PR agency, the TR-VR is a unique virtual reality experience that will transport fans into the world of TR, and give them a hands-on feel of what it's like to hang out with the genius behind Mythili Yennai Kadhali, Monisha Yen Monalisa, Yen Thangai Kalyani and Veerasamy. 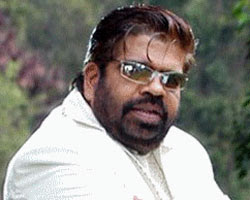 T.Rajendar tries on the TR-VR, and experiences a slightly disquieting experience of standing next to a virtual version of himself. Now he knows how Mumtaj felt while filming Veerasamy.

According to journalists who were given access to a demo version, the TR-VR comes with a variety of built in Apps that help you participate in numerous virtual TR experiences, such as gambolling alongside him in a suspiciously colour-corrected looking bright green meadow, frolicking with him in a tub of milk, or standing by and clapping while he goes postal on a bunch of ugly goons while simultaneously waxing lyrical about fritters and rice-cakes. "It's totally awesome and unlike anything else you've ever experienced. They should have called it Virtual Surreality, but I guess they couldn't since VS doesn't rhyme with TR.", said Son of Bosey correspondent Sankalesh Jimmy, fresh from his experience of sailing through clouds on what looked like a crimson nuptial bed, with TR sitting beside him.

Rajender himself chipped in at the press event, launching into a sales pitch with his inimitable rhyming flair . "This is the TR-VR. Confident about it we are. You will enjoy it, never fear. Unless you are the Kanchi Jeeyar.", he said.

The device itself is essentially a cooling-glass that you wear, which contains all the circuitry needed to deliver the complete TR-VR experience. "People who have played the recent PS3 title 'Heavy Rain' will instantly recognize how it works - very similarly to the ARI system used by FBI agent Norman Jayden, one of the four playable characters in the game.", said Rajendar, amazing everyone with his l33t 4w350m3n3ss. "Also please to notice, Norman is a name that begins and ends with the same letter, much like my own.", he added, breaking into a jig.

It has also been announced that international gaming giant Microsoft is keen to add the TR-VR to the launch line-up for their upcoming Project Natal. "Yes, we'd like to involve Mr.Rajender in our plans for Project Natal, since he's a superstar with a penchant for making outrageous and bizarre statements to the press. Just like Peter Molyneux.", explained a spokesman for Microsoft.

While this device is sure to delight TR's innumerable fans, fans of his son Silambarasan will be disappointed to learn that they have been left out. "As of now, there are no plans to introduce a TR Jr. VR", said a spokesman for Rajender's newly launched company, which has entered the electronics industry because both these words contain 'TR' within them.
Posted by Anand Ramachandran's Evil Twin at 1:29 PM

Objection! We are appalled that S U Saravanakumar was not asked for his comment, especially since he a well-known TR-Junior lookalike. We demand to know what he thinks.

ps. This blog has the most bizarre captcha - today's is "actoro". Which, in Tamil, is a sly statement on TR.

For the last time - Sara does not appear in snippets. he's very busy.

frolicking with him in a tub of milk?? Why would you do this to us readers?

"..while he goes postal on a bunch of ugly goons" was total asatthal.

However, I did not get get the 'fritters and rice-cakes' reference. Krunk sorry, Krunk repent.

Everyone - thanks for reading Son of Bosey

AR, have you ever got the forward e-mail where they show how a baby panda evolves? At the end, it shows TR in one of his extraordinarily stupid poses! It was the first forward msg in a long time which made me actually cry while laughing! :D

Oh, and I just realized that you're initials are AR. Maybe you could enter into a partnership with TR? :P

In U.S they made Avatar,
In India, there is only one T.R;
Do not fear the Simbu VR,
It will be directed by the only T.R;
If you think you can stop T.R,
You are only ending up doing more P.R;

As TR once said "DANDA NAKKA..AE..DANAKKU NAKKA".
It is turning out to be true.

one more idiot turning into god...oh wait all of you'll already worship him