Aamir Khan upstages SRK, gets Solar Crater named after him. 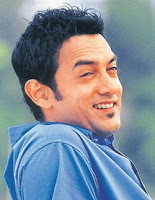 World-famous Bollywood superstar Aamir Khan, in his well-documented eagerness to always outdo fellow superstar Shah Rukh Khan, has responded to SRK's latest claim to fame by attempting to get a Solar Crater™ named after him.

“Yes. Everyone knows that the sun pwns the stupid moon. Hence I'm having one of my fans name a crater on the surface of the sun named after me. I rule. And I'm not interested in awards – my fans' recognition means everything to me”, said a beaming Aamir Khan, quickly hiding his copy of 'More Tell Me Why' behind his back. When someone pointed out that the sun actually didn't have a surface, he retorted "Rubbish. I've read Gray's Astronomy. I know all about planets."

He also revealed that he plans to have his name changed to 'Aamir Khan Khan'. “That way, I'll always be twice the Khan Shah Rukh Khan (not to be confused with Khan Abdul Gaffar Khan) is.”,he winked, before adding “Everyone knows that Khan pwns Rukh as a middle-name anyway.”

“Anyway, he refers to himself as King Khan. He should actually be Rukh Khan. King – Rukh. Like that random 'castling' move in Chess!”, he grinned, dipping into the copy of 'Children's Knowledge Bank' he had on the table.

“This is all a mistake! The truth is that one of the craters on Shah Rukh's make-up less skin was so large, I jokingly called it the moon. The press is to blame for the mix-up.”, said an agitated Gauri Khan, instantly leading to a barrage of hate-messages on twitter aimed at Rajdeep Sardesai and Barkha Dutt.

In related news, there is no truth to the rumours that one of the craters on Moon Moon Sen has been named after former president A.P.J.Abdul Kalam.


Note : This post is part of an experiment to treat the same subject of satire in three different ways. There's a cartoon here and a short story here.

Wildlife photographer S.U.Sarvanakumar, astute person that he is, was quick to point out that this appears to be a viral PR campaign for the Tamil version of 3 Idiots, 'Moonu Idiots'.

I've heard that he's making a movie 'Zameen Taaron Par' to prove that Sun actually has a solid surface.

I have nothing witty to say...i love this blog and will continue to love it...post is brilliant!

PS: how many Vols did they have?

You've taken the most suitable Aamir Khan picture for this article.

I would get a sunspot named after me...

By the way why don't they name stars after Stars? There are millions of stars in the sky... let us be generous.

"A very shrewd move, I must say, although who pwns whom during an eclipse is still unclear" quipped the renowned wildlife photographer S.U.Saravanakumar :)

Fake news, always fake news. Most slapstick effect achieved because of the juxtaposition with the serious medium. cartoon didn't work for me at all. but heck! why am i anaalyzing? Thanks for the laughs...

“Anyway, he refers to himself as King Khan. He should actually be Rukh Khan. King – Rukh.

Although "Fuck" in juxtaposition with 'Sankalesh' and 'Jimmy' is also pretty priceless by itself.

I Khan not believe this!

otha polandhutta da - the "khan abdul gaffar khan" bit was too much god...