In a daring expose, India's Central Bureau of Investigation has unearthed a sinister plot by the Indian Olympic Association chief Suresh Kalmadi to slyly pass off the upcoming third season of the Indian Premier League as the Commonwealth Games, by replacing the IPL name and logo with those of the CWG wherever they appeared. 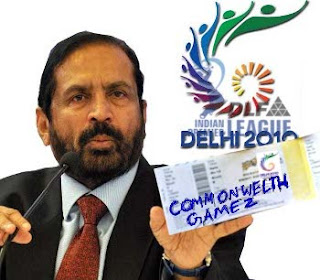 The evidence that apparently led to the sensational discovery was several ticket-books, pamphlets and T-shirts on which the IPL logo was clumsily covered up with a CWG sticker. The words Indian Premier League had also been hastily struck out with a magic marker, and replaced with 'CommonWelth Gamez'. The stickers may have fooled us, but the wrong spelling of 'CommonWealth' was a dead giveaway”, said a proud CBI officer, clutching a 'Where's Waldo' picture book close to his chest. He left the room in a huff when someone jokingly asked why the CBI had not yet successfully solved the mystery of why all CBI officers still dressed in safari suits.

Cornered by the CBI, Mr.Kalmadi admitted that he came up with the plan as a way to salvage the Commonwealth Games, preparations for which are way behind schedule. “Damn. Busted. Now we'll have to actually complete the work and conduct the damn thing.”, he complained. “Look, we are hopelessly behind on many aspects of preparation for the games. Bhanotie, myself and the boys thought it'd be easier to simply fool people into believing that the IPL was actually the CWG. Just like passing off someone else's homework for your own at school.”, he finally confessed, looking forlornly at a picture of Kaavya Vishwanathan for a few seconds, and tucking it back into his beard.


When asked how he hoped to pass off a cricket tournament as a multi-discipline athletic event without anyone catching on, Mr.Kalmadi said that since noone watched the Commonwealth Games anyway, nobody would really notice. “Everyone would have just thought that we slightly modified the games schedule to include only cricket, and simply carried on enjoying the games.”, he clarified helpfully. “And in any case, they're not all that different. The CWG is run by people of the commonwealth, while the IPL is run by people of uncommon wealth. The CWG has discus throw, while the IPL people discuss throwing. Both have head honchos whose names end in 'di'. Both have cricket matches featuring players whose hearts aren't really in it.”, he quipped, toying with the idea of starting off another annoying hashtag on twitter.


And I'd have gotten away with it, too, if it hadn't been for those meddling kids . . er . . CBI officers.”, he signed off, betraying his love for Hanna-Barbera classics.

Posted by Anand Ramachandran's Evil Twin at 11:11 AM

Also, Gavaskar commenting "Backing himself up and applying himself onto the task up by using his feet", might fool people into thinking it is gymnastics he is talking about.

Oh My God Above If There Is One...
This is brilliant!! Even better than usual.

I now possess a stomach ache and shall shortly be writing to your principal address of business to claim medical bill reimbursement.

"Mr.Kalmadi said that since no one watched the Commonwealth Games anyway, nobody would really notice". How do we know this is made up by you and not something really said by Kalmadi

@naren You don't. And of course, I'm not imaginative enough to make up shite that's weirder than what Kalmadi says and does in real life.

Commonwealth Games is played among countries that were owned by the UK, IPL is plyed by teams which can Own the England team any day.
(Btw, that also rhymes)

Common welth, just like common sense, is common but still very few have it! :D Awesome!